The Mercado Cervantino of Alcalá – The Franklin Students' Blog

October in Madrid is now here, and to me, that means one thing: the medieval fair in Alcalá de Henares. It was the first place outside of Madrid that I visited in Spain—getting there is easy, just hop on the cercanías (local train)—and I have gone every year since. This year will be my fifth.

Alcalá de Henares is worth visiting in any season. With a history stretching back to Roman times—when the city was called Complutum—Alcalá is home to one of the most historically important universities in the country. As a result, the old city center is so full of monumental structures that it was declared a UNESCO World Heritage Site in 1998.

But the city really comes alive during the medieval fair, which takes place during the second week of October. The normally sleepy streets are jam-packed with people, and the open plazas are stuffed with booths, tents, and stands. Colorful flags and banners hang from every building, vendors are dressed in period garb, and actors parade through the streets in costume. It is an extravaganza. The Spanish really know how to throw a party, and this is no exception. 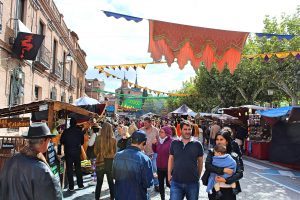 One of the chief pleasures of the fair is to stroll through it, examining the wares on display. There are wooden sculptures, bowls of spices, enormous wheels of cheese, and knickknacks of every kind. Rides are set up for the young kids, powered by pedaling jesters. You can pay to take a camel ride or to enter a petting zoo. Predatory birds—falcons, hawks, eagles, owls—stand guard in one corner of the fair. And the food and drink are plentiful. My favorite places to eat are the enormous tents where flamboyant waiters serve you meat cooked on a giant charcoal grill. I prefer the blood sausage (morcilla).

In sum, the festival summons that most typical feeling of a Spanish festival: of overabundant, super-focused, ultra-vibrant life.

The festival is called the Mercado Cervantino in Spanish, which gives you a clue to its history. The medieval fair is held to celebrate the baptism of Spain’s greatest writer, Miguel de Cervantes, which was on October 9th of 1547. That giant of literature was born right here in Alcalá; his childhood home has been preserved as a museum—a fairly modest structure for such a legendary figure. Right in front of his house, seated on a bench, are statues of his two most iconic characters: the lean knight Don Quijote, and his plump squire Sancho Panza. A visit to Alcalá is not complete without a picture of yourself seated between them.

You may be lucky enough to see these two characters in the flesh. Actors dressed up as this dynamic duo parade the streets, with the Don seated on his emaciated horse, Rocinante, and Sancho following behind on his beloved donkey. If you go to Alcalá’s central square, the Plaza de Cervantes, you can see the great writer himself—a metal statue, high up on an ornate pedestal, holding his feather pen. Standing behind the statue is the lovely bell tower of the church of Santa María la Mayor, where Cervantes was baptized. Literally and figuratively, Cervantes looms large over Alcalá.

Yet one need not have any love of history or literature to appreciate the fair. One need only walk around. Buy a plastic shield or a model castle; examine the pig roasting on spits; or sample the baked potatoes and honey mead. Meanwhile, actors on stilts and others dressed as monsters stomp through, accompanied by a core of drummers. You may even see a man cradling a giant snake. If you are there at the right times, you can watch a performance of medieval battle—jousting and sword fighting. And, of course, all this takes place in a beautiful, historic city, which you may say is the lead actor in this whole scene.

tion about this year’s fair, see the official website: http://www.mercadocervantino.es

Roy Lotz is a graduate of the Teach & Learn in Spain’s Master’s in International Education (2018-2019). You can read his other writing on his blog: https://lotzintranslation.com/