For the month I stayed in Alcalá de Henares, I think my absolute favorite trip was to Toledo with the university. I went partly because I was taking Spanish Civilization and Culture, and the professor said it was recommended we go to see all the things we were learning about in class, but also partly because it was one of those places I had always been curious to see. I had heard a lot of great things about Toledo, but for me it was one of those “you had to have been there to see it” kind of things. When I went, it was exactly that. 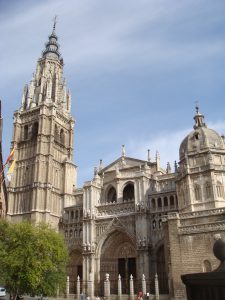 When I first saw Toledo, I noticed that it was circular and seemed to be its own little world, but walking the streets, I realized how much of its own world it was. The city was a blend of Hispanic, Muslim, and Jewish culture that happened years ago, but it felt like it was just yesterday. As we walked to different historical spots and cathedrals, I could see small tile pieces with Jewish significance lining the sidewalks, but when I saw the cathedrals and other religious buildings, I could see the Roman Catholic and Muslim influence. It was a little overwhelming to see the three cultures clash together, but it made the city more exciting to see and walk around in. 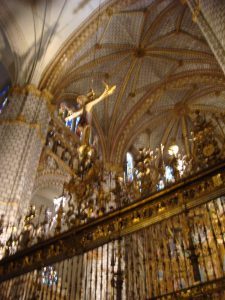 My favorite site to see in Toledo was the Monastario de San Juan de los Reyes for many reasons. The first being, we were learning about the royal family in Spain during the 15th century, so seeing something they made and a tangible piece of history was absolutely amazing to me. In history classes, you only learn about these people and what they accomplished in history, but actually being able to see it and see what they left behind is pretty spectacular. The second reason was the amount of detail put into the monastery was just mind blowing. You can see how much time and effort was put into creating this monastery and it’s almost like seeing history being carved into something solid. It isn’t a piece of paper that can be so easily lost or a story told orally that gets forgotten through the years, the history of the royal family and their beliefs were literally carved into great detail in the monastery so it’s never forgotten or lost. 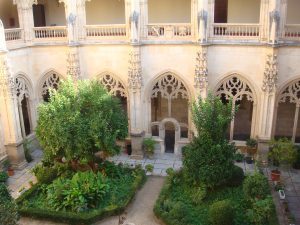 Another equally interesting place I visited in Toledo was the Santa María la Blanca because of the way you can literally see the blending of the three cultures. It’s now a museum, but it was originally a synagogue for the Jewish people. What’s interesting about it is it was built by Muslims, so there is a lot of influence from them in how the synagogue was built. Later when the royal family took over all of Spain, the synagogue was transformed into a cathedral, which you can see in the structural add-ons and the different shrines built. Now as a museum, it is an example of how the three cultures overlapped and clashed in so many ways. The mixing of these three cultures left a permanent mark on Toledo and still influences it to this day when you walk the streets.

Going to Toledo was an absolute adventure for me. I got to walk the streets that held so much history and I got to see tangible pieces of history that not many people get to see or appreciate in their lifetime. Toledo was exactly that: a tangible piece of history that will never be forgotten or lost and I think it’s one of those things you have to see to believe. It’s a place I tell everyone and anyone to go see at least once in their lifetime.